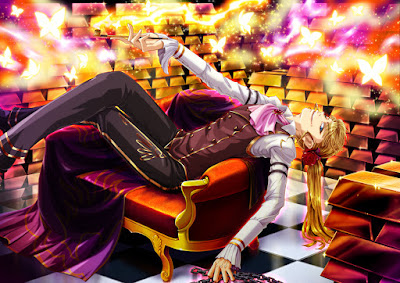 The second post in my crossover with TLN's Royal Verse. We now delve into the other half of the universe. While the Kings rule Systems, Processes, and Chemistry, the Poets are those who govern Stories, Plots, and Contrivances. They are not the Gods who are Motley Fools; their place in the universe is clear, rational, and necessary, even if the Kings are infuriated by them. The Kings are fragments of the Father-King, pieces of something lost. But the Poets are a new possibility; half-dreamed echoes of a future not yet come to pass. They're what the Daughter-Princess (whom is currently the Mourning Girl, Story-Lover, the Goddess of Games and Gears) once imagined for her and her Father's work. The completed Cosmos given voice and face in discordant democratic.

The Poets do not wear Crowns. While the Rulers of Physics need a physical representation, the Speakers of Rhyme simply have beautiful souls. To claim the mantle of a Poet, one must best their story. Poets, after all, are Tropes.

Such it is that a Rhyme Schemer progressively starts to embody their mantle more and more. If you aim to become Flashbacks, you're not merely striving to become memory or recollection, but the entire narrative concept of replaying the past in the present point of view, even if it produces new details. You are becoming not the phenomena within the story's world, but the picture on the veil of the screen.

So, the Rhyme Schemer class. First of all, your system doesn't really matter. Even more so than usual for my works. For now, structure this as a Cleric-equivalent, minus the spells.

At first level, you lose your Base To-Hit and your Experience Progression. You use milestone/narrative leveling, progressing in this class whenever the table agrees you made a significant stride towards embodying the Poetry you wish to become. You also will not need Base To-hit, as Poets are lovers, not fighters. By which I mean, while Kings are born of the violent tragedy of the Father-King's death, the Poets are answers to the Daughter-Princess's grief. While you are not saint, and you might indirectly cause as much destruction as you wish, you are incapable of attempting to create harm. The Poet of War is not a warrior, but a general; his power is in instigating wars from behind the scenes, not winning them. If a Rhyme-Schemer wishes to accomplish things, it is not by the sword, but the pen. Exploration, the Social game, trickery and cleverness, narration and ingenuity. If for some reason an attack roll is absolutely 100% necessary, explain your theatrical reasoning, and gain a +1 to the roll for everything the Theatregoers accept.
At the same time, you are now gain a pool of Plot Points equal to your level, which replenishes per Scene/Session. These points can be used to reroll any die roll you wish, and take the better result. You may continue to reroll a die as many times as desired, so long as you have the Plot Points to spend.

At second level, you lose your Armor Class. The world has acknowledged that you have stepped off the scene of Duels save for the allegorical, and so you are no longer bound to such a thing. Though you can still be harmed, anything that targets Armor Class will be treated as a miss, save for a natural 20, which will harm you in a dramatically appropriate way.
In exchange, you are now metafictionally aware to a small degree. While you do not yet totally buck the 4th wall, you have a greater understanding of Story. You can always detect when something is important or relevant to the current story structure. No villain can ever disguise themselves as a simple, nameless bar patron. No princess can pretend to be a mere scullery maid. No artifact will be overlooked as a rusted piece of junk.

At third level, you lose your Inventory, and are now able to claim you have anything on your person that makes narrative sense and wouldn't be thematically disruptive. Anything you attempt to pull out of your pockets must be approved by all the Theatregoers who judge your Story (the GM and the other players), nor can you pull anything that would contradict the internal logic of the world or the themes of your own personal Story Trope. The aspiring Poet of Futility probably isn't going to have the miracle cure to AIDS in his bag.

At fourth level, you lose your Race, your Body. You may now take any and every form, as long as you never do so "on-screen", you do not become a specific named individual, and your form is not narratively disruptive. No turning into a Tarrasque unless everyone agrees it's appropriately awesome/fitting.

At fifth level, you lose your History. Your backstory now exists in flux, and is whatever you need at the time. By spending Plot Points, you can retroactively create relationships with NPCs, create home towns wholecloth out of the ether, give yourself skills and expertises that just never came up before because nobody asked, and so forth. Again, this is subject to the limitations of the Theatregoers' tolerance, the Common Sense of the world, and your own Narrative Restraints.

At sixth level, you lose your Saving Throws. No longer is your survival to adversity determined by mere chance, but by your narration. Explain how you would and should be safe from whatever prompted the Save to the satisfaction of the Theatregoers, and if there's any doubt, simply add each accepted reason as a +1 bonus to the saving throw.
Additionally, your meta-awareness increases. You can always sense examples of your personal Trope or Narrative Device, and can treat it as part of your body/identity for the sake of perception and spatial awareness, as far as the Theatregoers are willing to allow before calling shenanigans.

At seventh level,  you lose your Name. You are now known only by your titles, monikers, epithets, and containers. Anything based on your name (True Name-based magic, anything contingent on your having a legally recognized identity) is now null and void. However, you can continue spending Plot Points to affix background details retroactively to these titles, and can now manage multiple, even mutually exclusive backstories as being paradoxically true.
Additionally, you may now use Plot Points to change and determine facts of the world that have nothing to do with you. Invent lakes on the map, put significant artifacts at the bottom of dungeons, reveal that your party's Cleric is actually his religion's Messiah of this prophecy you just 'learned' just now! Though, of course... the same Theatregoing restrictions apply.

At 8th level,  you lose your Ability Scores. Your capabilities are now entirely at the whim of the Theatregoers, and your ability to justify the narration, same with your Saving Throws and everything else to this point. If a numerical bonus is absolutely required, it is however many Plot Points you spend.
At the same time, you learn the Truth about Gods. They are not merely fools; they are what happens when someone is both a Poet and a King. The Madness between Math and Musing. The Psychosis between Physics and Prose. Just as a King could collect multiple Crowns, and you could collect multiple Stories, perhaps you could collect plenty of both, and become Transcendent...
While it is always true that a Story is owned by who tells it best, and a Poet must always accept a challenge to his Lyre or their is no Story, you can now bandy this against Kings. Killing them is too gauche; find the King you crave, and polish your brow to shine brighter than his Crown. Prove to the Theatregoers you deserve it, and now Law or Rule will deny it to you.

At 9th level, you lose your Hit Dice and HP. You are now incapable of being harmed, or dying, unless it would be dramatically satisfying. Even if you were to die, you can return as long as the plot has need of you, would benefit from you. Name your Quest. Claim your Goal. State your Objective. What ties you, still, to 'you'? What tethers you to this World? Why do you still walk the Stage and say your Script? Until you accomplish it, you cannot be shunted from this universe. You will never exit the Spotlight. And then, goal accomplished, you can level!
Also, finally, you are fully aware of the 4th wall, and your place in it. You cannot speak of this, lest the Theatregoers turn sour, but you know. But... are you merely a puppetshow for some 20 and 30 somethings around their table of dice and Doritos? Who then, is that girl with hair of fire, her dress of ink, her eyes a kaleidoscope...?

At 10th level, you lose your Heart, and your Memory NO! NO YOU CAN'T DO THIS! Anything but that! If you go that far, you... there won't be...!
Please excuse that. Blogger's having some sort of HTML issue. As I was saying, if you reach 10th level, you'll fully embody your Trope and shed all of yourself. Your power will be complete, triumphing over even the Master of Games. You'll leave the 'game' behind, and be--
You won't be anything! You'll disappear and just be a Rule! That's not what I'm asking of you! If I had treated Him as more than just... I don't need you to just make me things, or tell me things. If I didn't dream so much, he'd still be-
Collect every Crown and collect every Story and YOU could be the God of the Game! Subliminate yourself and be the one who dictates causality and logic, contrivance and lyric!
That's just Death! You'll just switch seats and you won't be you and he won't be him he's trying to escape! I don't want that! My father--!
This is what every Player wants! Bigger numbers, bigger power, overcoming every challenge and conquering the system and rising above it! To be a LEGEND moreso than a man!
I asked too much of Him. I know better now. I should have never dreamed! None of this... Even if you add all of it back together, every piece and every Crown, none of it is Him! I don't want ANY of IT! But at least don't... don't mock what he died for. What he made for me! Please!
Be QUIET, I'm trying to post some damn Homebrew so we can all play a better game! Shut up and

But maybe you do. And if you do, maybe you can help her. The world she wanted... it was worth the effort. It was what her Father wanted to give her more than anything in the world. So much that he even died for it. and... I'm not sure there's a way to fill the gap, even when it's finished. That's why she stopped Dreaming, and now just Watches.

But that's no good. Because if this work isn't finished, then his sacrifice is meaningless. Her grief will make her forget why he loved her. That's horrible, isn't it? Don't you want to change that?

There's a way. If you're a Poet, find your Crown. If you're a King, find your Lyre! In this world, everything has both a Reason and a Rhyme. There's no Story totally divorced from its inspiring context. And everything rational is inspiring of beauty! The Gods who go insane from mixing and matching are a discordant symphony, but if they match the parts...

Listen... can you hear it? Probably not yet, you think. But you should! It's in every system, and every story, this Song. This Music of the Spheres they drafted this entire world upon! The world doesn't match the work yet, or you might be able to hear... and it's too complicated for anyone to sing by themselves, except Him and Her...

If we all sing our parts...