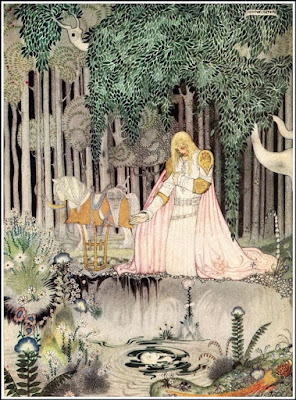 Pseudo Fenton from the Discord (he has no blog, sorry!) requested a smattering of Scandinavian/Nordic fairy tale-themed classes, which I ran away with! I ended up drifting a bit into some Tchaikovsky, but... eh. It happens. Hope you enjoy! There's enough class concepts here to replace an entire D&D party!

Inchling (Thumbelina/Tom Thumb)
This class uses the Saves, To-Hit, and XP progression of a Rogue, but has a d2 Hit Die.
You are the smallest thing. The size of a thumb, if that. Perhaps not even the size of a bean. You could actually perhaps dance on the head of a pin, which will be ironic later. Because of your small size, you are almost impossible to detect if you're trying to go unnoticed; you have the maximum possible ranks in the Hiding skill for your system, but otherwise suffer all the drawbacks of being so small, with one exception: You... don't suffer fall damage. That's... weird. Perhaps you just safely Feather Fall safely, or your fall is always broken by something cushy. It's very conspicuous, because even in a world that doesn't understand modern Newtonian physics the little thing should still go splat when it falls from up high. But you don't.

Additionally, you can speak to all little things as if they were people. Insects, frogs, birds, and the like all share a language with you, and are inclined to treat you kindly at first blush.

Finally, you have one mundane, non-combat skill that's pushed to supernatural degrees. Perhaps your singing voice can entrance anyone who hears it on a failed save, or perhaps you can spin a piece of straw into solid gold if you spend all night doing so. Decide this with your GM.

At Name Level, you grow a pair of fairy wings, explaining all the mysteries of your existence. If fairies are entitled to any other traits or abilities in your system, you gain them.

Ice Queen (The original story, but also Frozen, lol)
This class uses the saves, To-hit, Hit Dice, and XP progression of a Magic-User.
For some reason or another, you have powerful elemental control over Ice magic.* It's to such an extent that it's a part of you, ignoring environmental effects related to ice, and taking 1 less damage from every die related to it. The cold never bothered you anyway, you might say.

An Ice Queen has a pool of Magic Dice (d6s) equal to their level. Due to the intimate, personally expressive nature of their magic, Charisma is used for any stat-related purposes and they have no spell list, and instead describe effects ala carte, investing as many dice as is proportional to the effect. Simple cantrips like producing snowflakes or little flurries are free, producing an entire block of ice might be a single die, and producing an entire palace made of ice might take nine or ten dice. The dice are rolled when the effect is produced, either determining the damage of the ice attack, or else determining the efficacy or stability of the effect. Dice that roll a six are removed from the pool, and when the Magic Dice pool is exhausted, a Wild Surge occurs. Dice can be recovered by rest (full recovery), or a single die by exposure to your element you didn't produce, such as gorging yourself on snow or bathing in frigid water for an hour.

These effects can be positive or negative, but are mostly negative. Perhaps you produced a snowlem personifying your best qualities, with HD equal to the MD invested in him. Perhaps you accidentally struck someone you cared about them and cursed them to slowly turn into ice. Perhaps you caused an eternal winter, or you turn all the food at the party into delicious ice cream. Perhaps you create a giant mirror of ice that reflects the light of heaven back up toward the sky and only reflects the ugliness of the mortal world which then shatters and lands its shards in the eyes of men so that they only see the bitter, rancid, sinful truth to everything.

At Name level, some event occurs that allows you to gain better control of your powers. You discover the Power of Love, or you beat up the Devil who gave them to you, or you realize you're actually the Avatar, the Last Icebender. Either way. your powers adjust; all effects cost one less Magic Die than normal, and when you Wild Surge, you receive a partial veto power, allowing you to reject and replace any detail of the Surge the GM describes with one of your own.

* This class can be adjusted to be about any other elemental or conceptual force. Play a Summer Queen, or a Noise Prince, or a Flower Knight, or a Rubbermancer. Go wild.

Nutcracker Prince (The Nutcracker)
This class uses the Saves, To-Hit, Hit Dice, and XP Progression of the Fighter.
You are a nutcracker, or perhaps a tin soldier, or a puppet boy. In any case, you are a living toy, with all that entails. You need neither food, water, air, nor sleep. You have the power to change to human size, but when in your smaller form, you can choose to remain perfectly still and be totally indistinguishable from a normal object. If someone doesn't know you personally or see you move, they'll never even suspect you're anything but what you appear to be; this even trumps divination magic.

In your fully-sized form, your wooden or metal nature gives you the AC of being appropriately armored, and you have all the fighting capabilities of a Fighter of your level, though you roll Disadvantage on Dexterity and Initiative checks due to your stiff body.

Finally, you have two magical abilities that foreshadow your true nature. Firstly, you can dance in the dreams of others. When people slumber in your presence, you can meld truth into their nightly fiction, and manipulate their dreamscape. You can defend them against nightly intruders, plunder their minds for secrets, or retrieve imaginary treasures from the dungeons of their unconscious. Secondly, you have the power to remove curses by absorbing them into yourself, by performing some appropriate ritual, such as cracking a nut in your mouth and hopping backwards seven steps. If you do this, the curse is lifted from the victim and it now applies to you. This is your true nature.

You weren't always a toy. It was a curse you accepted, and it was your first curse, swallowed too deeply. The only way to remove it is something you can't accept or accomplish; perhaps you need to forgive the person who hurt you so deeply it broke your name and your heart. Perhaps you need the reincarnation of one who spurned you to promise to love you unconditionally. Perhaps you need to crack the world's shell in half.

In any case, at Name Level, you learn of how you can finally accomplish this task, and are capable of actually performing it. Once you do so, your curse is lifted, and you return to your former splendid form. Not only do you become a handsome immortal prince of dreams (or whatever you were), but every curse you absorbed inverts into a blessing, and you now possess the power to grant others a dream come true, pulling a single fantasy of theirs into permanent reality.


Polymorphic Princess (Swan Lake)
This class uses the to-hit, Hit Dice, and XP Progression of a Cleric, but the best saves possible in your game.
You are an unjustly cursed innocent, with a curse so deep it pervades not just your body and soul, but your very story. Your love, your innocence, your purity, your beauty and virtue are all heavier and truer than the world, but this curse uses that weight against you, and shackles you down.
This curse damns you to a form you don't belong in. Perhaps you turn into a swan during the daylight, or an orc during the night, or perhaps you turn into a frog around anyone who would ever know your name. Regardless of the condition, it always forces you back into your unnatural shape whenever it would most hurt you; you can never be yourself around the one you love. You can never return home. Whatever the nature of it, you can't receive the happiness you deserve.

You may Lay on Hands as a Paladin of your level, and you are extraordinarily lucky, rolling your already amazing saving throws with Advantage unless it is against magic related to your curse, in which case you roll with Disadvantage. However, you are otherwise totally immune to any other curses or hexes; it was a total fluke that the first ever took, and there's no room for a second. You also have a number of Luck Points equal to half your level (rounded down, minimum 1), you can use to reroll any die. These points refresh every session.

At Name level, you meet whichever condition is required to break your curse, and it becomes a boon. You have full control over your transformation; it never works against you, and you do not require any trigger but will or intent. You are now truly immune to all curses for all time, and may cast Remove Curse by kissing a target. Once ever, should you die, you can return to life by the magic of True Love's Kiss, or the tears of everyone around you. Your story's curse was lifted, and you are entitled to your Happily Ever After with the full force of an apologetic, remorseful Fate.
at December 15, 2019